Anticoagulation is the cornerstone of treatment for thrombosis and thromboembolic complications of a variety of disorders. The incidence of the common indications for anticoagulation such as atrial fibrillation (AF) (2) has continued to rise because of an aging population; rising age-adjusted incidence due to higher burdens of chronic illness; and advances in early detection, prevention, and treatment (3,4). It is estimated that over 6 million patients in the United States are treated with anticoagulants (5) and are thus at increased risk of bleeding, with substantially increased morbidity and mortality. Secular trends in anticoagulation use have demonstrated a relatively rapid adoption of direct-acting oral anticoagulants (DOACs) for the most common indications for anticoagulation. There has been particularly rapid adoption of DOACs in venous thromboembolism (VTE) and AF in the absence of mechanical valves or mitral stenosis. Systematic reviews have demonstrated favorable risk-benefit profiles for DOACs when compared with vitamin K antagonists (VKAs) in the management of AF and when compared with low-molecular-weight heparin followed by a VKA in the treatment and prevention of VTE (6,7). Additionally, the emergence of reversal agents (8) may also further increase the proportionate use of DOACs and influence the management of bleeding that complicates anticoagulant use (9).

This ECDP focuses on the management of bleeding in patients being treated with DOACs and VKAs for any indication. The role and management of antiplatelet agents is considered in the treatment algorithms. Bleeding classification has been simplified and is categorized as major or nonmajor (10). The former includes bleeding that is associated with hemodynamic compromise, occurs in an anatomically critical site, requires transfusion (≥2 units of packed red blood cells [RBCs]), or results in a hemoglobin drop ≥2 g/dL (10). All other bleeding is categorized as nonmajor. The recommendations provided by this ECDP include guidance for temporary or permanent interruption of therapy, general approaches to bleeding management, decision support for treatment with a reversal agent, and indications and timing for reinstituting anticoagulant treatment. The primary goal of this ECDP is to guide the management of acute bleeding in patients treated with oral anticoagulants (OACs) and to supplement the “2017 ACC Expert Consensus Decision Pathway for Periprocedural Management of Anticoagulation in Patients With Nonvalvular Atrial Fibrillation” (11), which addresses the management of patients undergoing planned surgical or interventional procedures.

Given the emergence of new OACs for use in the prevention of VTE as well as the introduction of new reversal strategies for factor Xa (FXa) inhibitors, it was determined that an update of the original ECDP, published in 2017, was needed to include guidance for use of those therapeutic options in addition to those previously included (12).

Of important note, the boxes within the ECDP algorithms were delegated certain colors to align with specific guidance found throughout each of the figures. 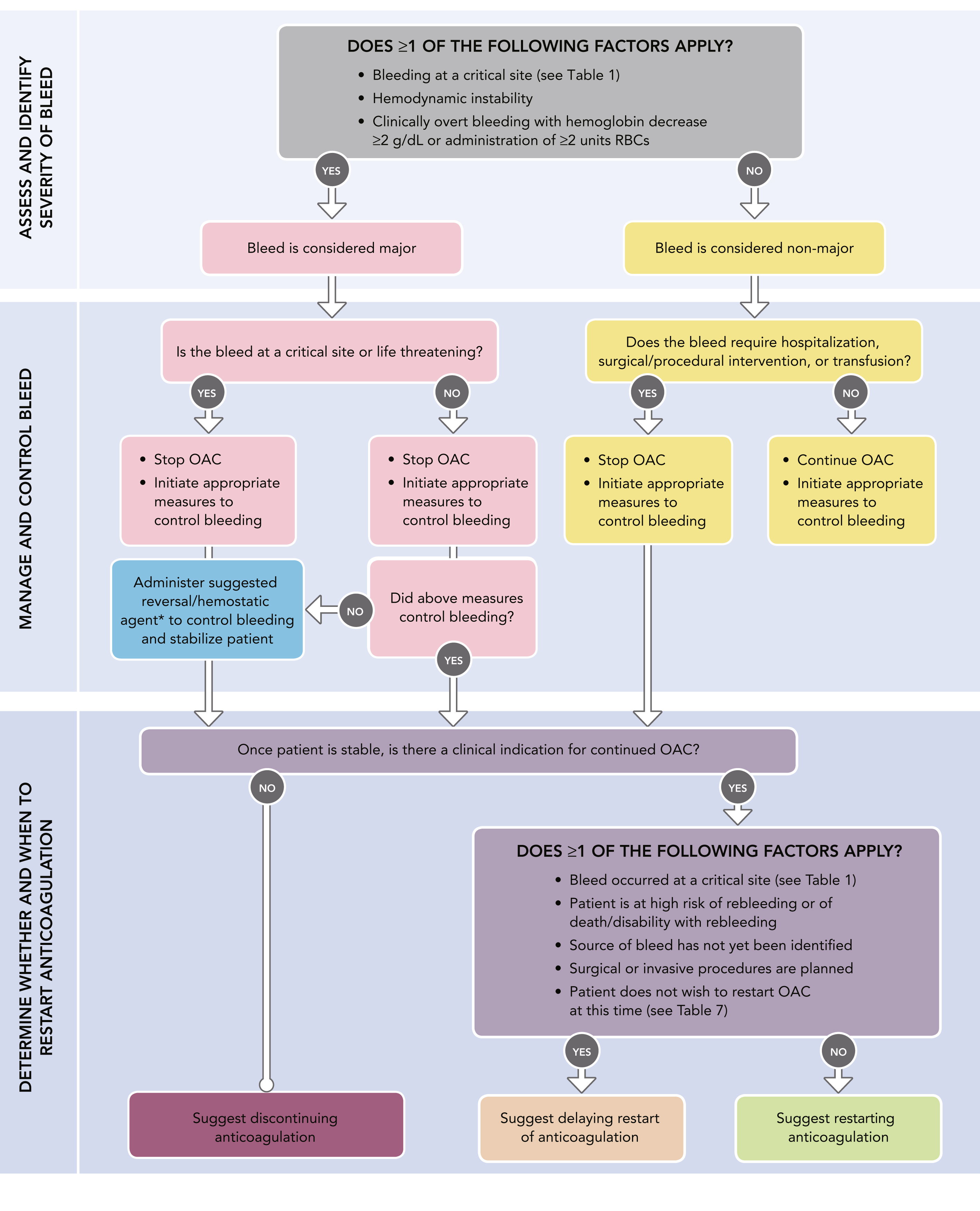 No interaction of PPI with Ticagrelor after PCI

A study published in Catheterization and Cardiovascular Interventions reported no evidence to indicate that there is an interaction between proton pum ...

A study published in the journal Blood reported that platelet-derived CXCL12 could be a possible target for the management of blood clotting disorders ...

Antiplatelet therapy administered in critically ill adult patients suffering from COVID-19 does not have an improvement in the number of organ-support ...